Christian Academy of Knoxville and Grace Christian Academy have been long-time rivals on the football field. Every year, the big CAK vs. GCA football game brings with it much anticipation and excitement. This game is even frequently televised as WBIR’s Prep Xtra game of the week or WVLT’s Rivalry Thursday game of the week. All this to say…this game is a big deal to these schools. 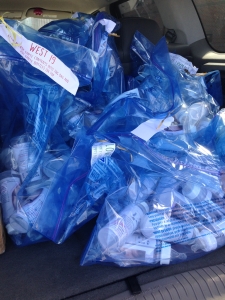 What’s amazing about these schools and this long-time rivalry is that for the past 6 years, for 2 weeks before the Warriors and the Rams battle it out on the football field, they collect spare change, cash, and even checks in baby bottles all coming back to support HOPE. We call this campaign the Battle of the Bottles, and year after year we are nothing short of impressed by how much these students (and teachers and parents!) can raise in spare change!

This year was no different than the past 5 years. In fact, this year may have been the most challenging for the schools as the campaign began right when students went back to school. So not only were these students and teachers becoming acclimated to the new school year, they were also busy filling their baby bottles with dollars and change all to support HOPE and life. We are so humbled by their commitment to give to HOPE! 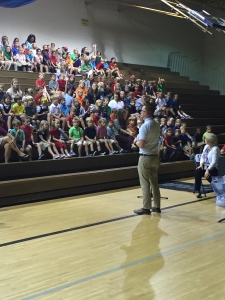 We were so thankful this year to be invited to speak in CAK’s elementary and middle school chapels. As Andrew spoke about HOPE and life and the previous years’ campaigns, you could feel the students’ excitement for the campaign growing. The CAK middle school even held a mini-competition among their classes to encourage even more participation. The students’ love for this campaign is so evident and to witness their excitement for supporting this ministry is truly a blessing.

We never know until game day what the grand total from the schools will be. We do know, however, that whether that total is $5, $500, or even $15,000, HOPE will be blessed and the men and women we serve in our community will be blessed as a result.

CAK, GCA, and HOPE staff on the field at half time!

The night of their big game is an exciting one, and while the schools can’t wait to see who wins the football game, our staff can’t wait to share the grand total with the crowd during half time.  This year, we were thrilled to announce that the total amount raised between the Warriors and the Rams was a grand total of $20,188.44!! Since the campaign’s inception in 2010, these schools have raised over $114,000 for HOPE…all in money collected in baby bottles. Our staff and this community are immensely blessed by the efforts of the students, teachers, and parents of both of these schools. THANK YOU, Christian Academy of Knoxville and Grace Christian Academy, for taking a stand for life and supporting HOPE! 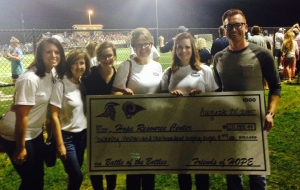